2-Shots is a classic rock covers band based in Sydney. A band of versatile musicians playing music that people know and love and putting on a great show with a unique twist.The band covers some of the greatest classic rock and blues artists of our time, all of who have more than one well known and recognized song. So, the 2-Shots philosophy is simple yet effective. Why settle for one great tune when you can hear two? Have a look at the set lists and you’ll see what we mean. If you love classic rock played as music was meant to be played – check out 2-Shots.

One half of the band’s twin guitar approach, Steve is also the man behind many of the song arrangements and ensures the authentic reproduction of the classic rock and blues sound that really is Steve’s signature. With a list of influences that reads like a who’s who of classic rock, it’s not hard to see where “Greeny” got his passion for the guitar

One of the founding members of 2-Shots, Andy adds a southern rock and boogie feel to his rock grooves but is still highly adept at the lighter touches when required. Andy’s skill behind the kit is drawn from varied influences including local greats Steve Prestwich and Rob Hirst along with those who have graced the world stage like Ginger Baker with a big nod to all time favorite John Bonham. Andy’s playing oozes Classic Rock!!!and the 2-Shots repertoire.

Greg Lindsay -Guitar
Greg is the newest member to join the 2-Shots family , bringing with him a Pandora’s box of guitar licks and experience. Well over 20 years of playing in bands in fact, this journeyman has found his home along side a bunch of Classic Rockers, the smile on his face is a reflection of his love for the Classics. Bringing a more modern twist to the fold “Greego” proves that Classic Rock is for all ages, shapes and sizes. Greegos influences are evident in his playing style, we could list them here but that would ruin the magic of discovery, so you have no alternative but to come to a gig to find out.

Every band needs a solid rhythm section to stand out from the pack. Greg’s playing does just that, a pallet of grooves from big fat & funky to solid hard rocking, he’s got all styles covered. With influences ranging from Deep Purple, Jimi Hendrix, Pink Floyd to the Rolling Stones, you cant help but hear that classic bass in the mix at a 2-Shots gig. A sound producer by trade and a rocker at heart Greg’s bass hots up when the sun goes down. 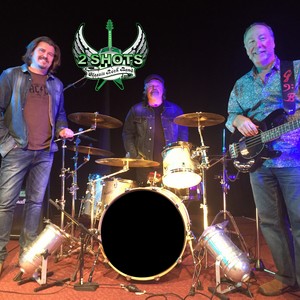