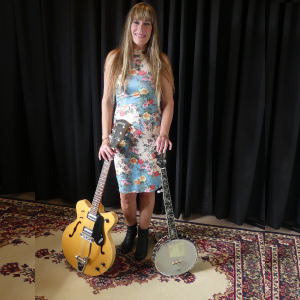 Jane Germain is a multi award winning solo artist with setlists comprising of a mixture of classic hits and roots, catering to any crowd. With her strong rhythmic guitar playing and her unique arrangements, Jane delights audiences of all age groups – her show has them yelling for more! Stylistically, Jane could best be described as rock-pop/roots/chill – a very individual act offering a wide variety of favourite classics and hits, with a few tasty original songs thrown in to the mix!

Jane Germain’s musical journey has taken her from her hometown, Sydney, to Western Australia and all the way back to her Chinese heritage (her Manchurian great-grandmother married a Scottish missionary). She’s played all the styles from folk to funk, blues to bluegrass that express her emotions and musicality in a career that’s won five WA Country Music Awards, Country Arts funded headline tours of regional WA, a residency in Beijing awarded by the Australia–China Council (where she collaborated with Beijing based traditional Mongolian musicians, Hanggai on her album, Chinese Whispers) and an invitation for her to represent Australia at the 2010 World Expo in China.

Jane has recorded 6 albums, as well as being in high demand as a session player on other Projects. Jane was invited to be a part of the great Banjo Babes International Ltd Calendar in 2018. She is the first Australian artist to be included and features as Ms May.

Jane’s song Listen to What You Know was presented with the Tasmanian Composers Festival – Song of the Year award, and her new album, Home on the Hill has been receiving rave reviews (and awarded Independent Album of the Year at the Western Australian Music Awards in February 2018).

“Her voice is like an instrument – it can be sweet and pure for a ballad, or it can take on a completely different tone for rock.“
SUSAN JARVIS – CAPITAL NEWS

“I had only dropped into the RSL for a meal whilst away from my home in the Blue mountains. Don’t know anybody here – sat down to listen to Jane after eating and thought I’d only stay for a few songs – then I couldn’t leave. Your original songs are moving, honest and heart wrenching at times. Your choice of covers took me right back and you nailed them beautifully. Thanks for digging me out of my potential misery hole tonight.“
Greg Fitzgerald