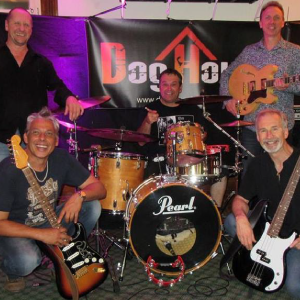 With over 30 years of experience in the music industry, members of DogHouse have featured in coast bands like the Button Mushrooms, Rat Race and Planet Rock.. Singer John Grunden, while a member of Perth band Freefall, has supported big acts like Joan Armatrading, The Divinyls, and Underworld. DogHouse consists of John Grunden on vocals, Matthew Lawther on bass, Warren Loades on drums, Duncan Ward on guitar, and John Marks on guitar.

When you’re at a DogHouse gig, you can look forward to some classic rock songs by bands such as The Angels, Dragon , The Cars and Mondo Rock, but get ready for some pleasant surprises too. Defying (and denying) the “maturity” of its members, DogHouse will leave you in no doubt that they are in touch with today’s contemporary sound, with a repertoire also containing songs by The Killers, Foo Fighters, Stereophonics, Kings of Leon, Jet and Powderfinger.

If you are ready to rock, check out DogHouse. We do it well, and we love it!