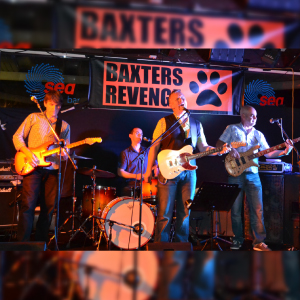 Mission Statement: We want to play music that we like and in so doing entertain the drinking and dancing patrons of every club, pub or music hall that we are lucky enough to get a gig in.

We got our name from Ron Burgundy’s dog “Baxter” that was unceremoniously punted off a bridge in San Diego in the movie “Anchorman” by a gruff biker. (Please Note: We will deny this if questioned as we do not want to pay any royalties to Wil Ferrell)

Neil- Lead vocals, guitar, a bit of Sax. Has reportedly managed to stay staunchly heterosexual despite dabbling in Musical Theatre. Owns a ridiculous amount of guitars and other musical equipment that is in no way proportional to his playing ability. Has played in many bands and musical acts through his formative years and one day hopes to be a grownup.

Chris- Drums, backing Vox. Has a big car to carry all of his drums and equipment. We rehearse at his factory bay- so he is the most valued member of the band. He can generally be found with drumsticks in his hand and earplugs in his ears as he apparently values his hearing. Chris plays in approximately 17 bands (never at the same time) and teaches many of the drummers on the coast. He likes long walks on the beach and is into “world peace”.

Darren- Bass, backing Vox. The nicest person in the band. If any of the patrons want to make a request, we steer them toward Darren as he will actually endeavor to help them. Darren locks in beautifully with Chris to form the most formidable rhythm section going around. Like the rest of us has played in many infamous musical acts over the years. Darren owns much of the PA and for this reason is also a valued member of “Baxter’s Revenge”.

Mauro- Lead Guitar, backing Vox. Reportedly a fan of 80’s “Glam Rock”. Insists on being called “Mr Mauro” in keeping with his status as the leader of the band. Blisteringly good guitarist with amazing dental hygiene. Possibly the fittest octogenarian ever to grace the cover of “Men’s Health”. Has lent his talents to many musical acts and someday hopes to get them back. Will dance for pennies.