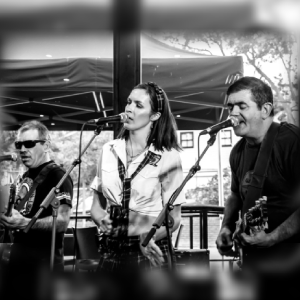 About The Barry Quokkas Band

The Barry Quokkas are a Sydney 5 piece Australian Cover Band performing Classic Aussie (& NZ) Hits from the 60’s to now!

A group of five musicians came together in 2016 to form a new band with the aim of playing covers of fun well-known Australian pop and rock songs.

“Given that Barry is such an iconic Australian personality (and singer / entertainer), and we’re an Australian covers band, we thought what better than to have a band name that plays on both his name and such a lovable Australian animal,” the band’s Facebook page says.

Lead vocalist Fiona McFadzean says, as the band’s name suggests, there are no pretensions or ego indulgences in the group – just a love of playing music live.

‘‘It’s all about playing songs that the audience can relate to, which encourages them to sing along and have a good time,” McFadzean says.

She describes the style of music as ‘‘quite an eclectic mix of material”.

“We do pop songs by artists such as Kylie and Sherbet through to traditional harder pub-rock songs by bands such as The Angels and Cold Chisel,” McFadzean said.

“While many other bands would struggle with covering that breadth of material we are able to present this variety because the vocal ability of the band allows us to great harmony vocals. This allows us to feature songs with softer shading and great melodies.’’

The Barry Quokka’s present a fun trip down memory lane with many of your favourite Australian songs but McFadzean admits the band does not stick rigidly to only doing covers of Aussie bands.

‘‘We are fairly generous with our definition of Aussie, and we play a selection of great hits from our New Zealand neighbours – after all, they’re like part of the family.’’

The majority of the members come from the St George and Sutherland Shire and are gradually building their profile throughout the region and beyond on the back of their live performances.