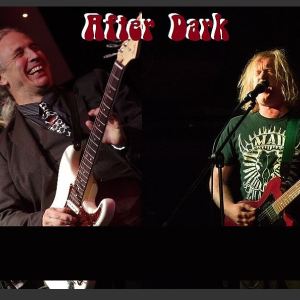 About After Dark Duo

After Dark are a powerful new Duo based on the Central Coast who play the best songs from the birth of rock and roll to the present day. The audience can dance or sing along to their heart’s content, all night long, guaranteed to be entertained by two of the best in the business.

Singer songwriter Daxton Monaghan has amazing talent. Daxton’s vocals and rhythmic work are admired by many onlookers. Daxton plays many covers and has the ability to sound like popular artists capturing the ears of many punters. As a singer songwriter Daxton has released over several albums to his name; he was selected and mentored by Bill Chambers which availed support with Australian artist such as Karl Broadie, Andrew Farris (INXS), Andy Kent (UAMI) Wess Carr from Australian Idol and band something with numbers.

Pat Dow is one of the most respected guitar players gigging round the country.

“Sydneysider Dow wears a perpetual “guitar face” as he twists and contorts body and expression as if to drag every last bit of feeling out of his Stratocaster. He is in total control of his tone, utilising every nuance possible to provide plenty of variety, both clean and slightly overdriven.” Steve Horne – 4/8/2014, In Daily, Adelaide’s Independent News

“There are some familiar sounds wound around Dow’s playing but it goes beyond that. Dow’s style is rhythmic but rich, melodic and specific and yet still refreshingly individual” Sue Miller – Vol 2 Issue 4, 2013 Blues-E-News Magazine

Orbison – You Got It/ Dream Baby

Goergia Satelite – Hands To Yourself

Ben Harper – Steel My Kisses From You

Crowded House – When Ever I Fall

The Black Crows – Hard To Handle

Pink Floyd – Wish You Where Here

Credence – Have You Ever Seen The Rain?

The Beatles – Get Back

S. Miller Band – Keep On Rocking/ The Joker Credence – Lookin Out My…/ The Old Man….

The Black Keys – Gold On The Ceiling/Lonely Boy