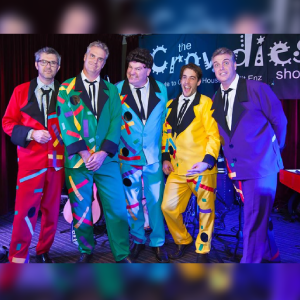 Another awesome crowd singalong clip from a dinner show gig.

Posted by The Crowdies Show – Tribute to Crowded House & Split Enz on Thursday, 7 May 2020

Performing timeless Crowdies Hits like ‘Weather With You’, ‘Don’t Dream It’s Over’, ‘Distant Sun’, ‘Fall At Your Feet’, ‘It’s Only Natural’,The Crowdies Show give you the brilliant sound and genuine spontaneity of Crowded House & Split Enz live.

Formed by full time muso Tim Pringle in 2007. A New Zealander based in Australia since 1999. Tim performs regularly up to 17 shows per month as a full time solo and Duo act specialising in Weddings & Functions.

Tim thought it about time he formed a full 5 piece band to pay homage to two of New Zealand’s finest artists – The Finn Brothers. Having gathered a fine bunch of seasoned musos the band was formed and is now out and about gigging somewhere near you!