The Australian Rolling Stones Tribute Show, formed in 2012, The Rolling Stones Revival Band have been paying their respects to the greatest rock and roll band in the world. The band pay tribute to all eras of The Rolling Stones long and succesful career that spans 29 studio albums and 250 million records sold. With 12 number one hit singles and 14 songs featured on Rolling Stone Magazine’s “Top 500 Greatest Songs Of All Time”, to this day the Rolling Stones remain one of the most enduring and popular music acts on the planet.

With combined experience of over 60 years and over 2000 shows in the live music industry, Rolling

Stones Revival recreate the classic visuals and sounds of a real Rolling Stones concert.  You will be taken back to the classic 1960s and 1970s period but also be able to hear all the classics from any period of their career.

The Rolling Stones Revival play 50 years of Stones hits from the early sixties right through to the 2012 single “Doom and Gloom” providing a powerful and honestly performed stage show complete with costume changes. Our shows are performed with full band instrumentation. 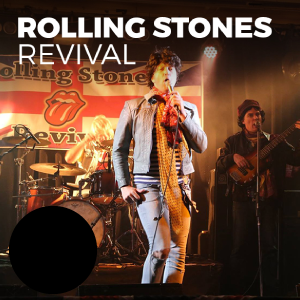