Ettalong school student Jardean loves to sing and can’t stop even for dinner time! But his mother put a stop to singing at the dinner table for manners sake.

A regular fixture outside his local IGA and Coles, Jardean first started busking so that he could buy himself and his sister an ice block. He soon realised he could afford to buy the whole family ice blocks as his talent started to shine and passers buy were captivated by his voice.

In 2014 Express Advocate reporter Denice Barnes was covering a local news item but became more taken by this kid singing with a guitar bigger than he was standing. A half page feature story took over as the news item covered that day.

He loves his school Ettalong primary and in 2014 was the opening act playing four solo songs to warm up the crowd for the night ahead. Whilst busking in Terrigal in 2015 Fairplay discovered Jardean and since then he has been a regular fixture in our roster, performing at the Avoca Markets, Dam Hotel, Patonga Beach Hotel…with many more to come!

When I was your man – Bruno Mars

Count on me – Bruno Mars

Just the way yo are – Bruno mars

Let me love you – Justin beiber

Say something A great big world

It will rain Bruno mars 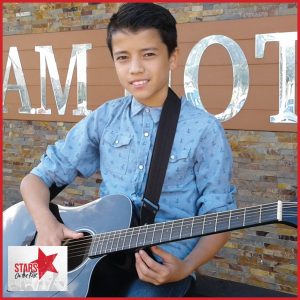