Hayley has always enjoyed listening to music – something that stemmed from listening to her dad’s music collection on road trips. When she was in year 2 Hayley’s teacher used to play the guitar on Friday afternoons and he would encourage her to have a turn. Not long after she received her first guitar for Christmas!

At 14 Hayley chose music as an elective and guitar as her instrument. Her teacher encouraged her to sing and, despite being shy, Hayley started singing lessons not long after. Since then Hayley has been relatively self-taught, constantly learning new songs and techniques.

Hayley has been lucky enough to perform at a number of local venues, including Lizottes, Avoca Markets, Shellys Café, Ark Café, The Dam Hotel, The Rhythum Hut, Umina Beach Markets, Avoca FC 21st celebration, engagements parties, Avoca SLSC and Copacabana SLSC (where she was the support for a Sydney band called The Bods). 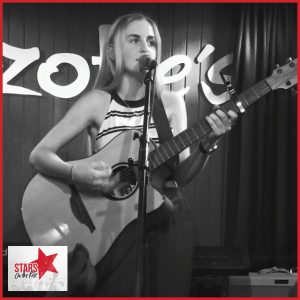