Brendon Harvey is a local musician born and raised on the Central Coast of New South Wales. His passion for music started at the early age of 13 after hearing some old cassettes of his dad playing in a rock band. He got his first guitar not long after and that’s where it all started.

It wasn’t until his music teacher heard him sing, did he relies he had a voice “the way she looked at me the first time she heard me sing, I’ll never forget that feeling I got” His passions began in rock n roll and metal when he was young playing in a band (fake high) for school concerts and battle of the bands, inspired by bands like AC/DC, Metallica, RHCP and also hip-hop influences like Eminem.

As the the years flew by and 2 beautiful boys later, Brendon has decided to take the leap and pursuit his passion for music full time. Now gigging regularly around the Central Coast playing live music with a Sunday session feel in cafes and beer gardens. Playing covers and a few of his own originals inspired by musicians like Ed Sheeran, Passenger, Powderfinger, Pete Murray, Jack Johnson and many more. just him his treasured Maton acoustic and his new best friend his loop pedal Brendon is well on the way to making a career out of his passion.

Shape of you (Ed Sheeran)

What do I know (Ed Sheeran)

Castle on the hill (Ed Sheeran)

Wish you where here (Pink Floyde)

To her doors (Paul Kelly)

Murder of crows (City and Colour)

Body in a box (City and Colour)

No other way (Jack Johnson)

You need me (Ed Sheeran)

Give me love (Ed Sheeran)

Where Did my life go  (Original)

Waiting on the world to change (John Mayer)

How to save a life  (The Fray)

Song About Somebody (Original) 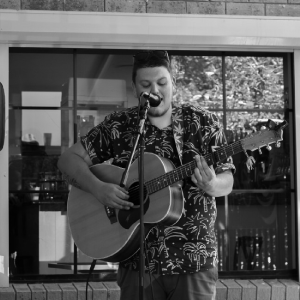