Marseille
Back in the USSR
China grove
Keep your hands to yourself
Born to be wild
Revolution
Hard to handle
Breakup song
Like wow wipeout
No secrets *
Alone with you *
SET 2.
Gimme all your lovin’
Sharp dressed man *
La grange *
Don’t change
Basketcase
Small things
Sweet home Alabama
Walkin’
What i like about you
The Middle
Long line

Come on
Rebel yell
Song no.2
Are you gonna go my way
Comin’ home
Shadow boxer
Jailbreak
Better
On my mind 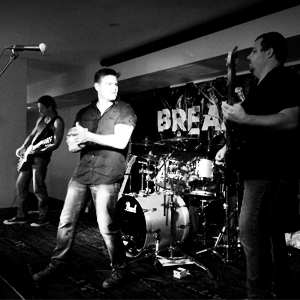 Breakout rock band started back in 2009 as a professional outfit consisting of Chris Johnston on vocals/ John Smyth on lead guitar/vox, Tobias Drengenberg on Drums/vox & Anthony Stocqueler on Bass/vox. We pride ourselves on producing a good rock sound whilst getting people on the dancefloor. We cover tunes from the classic rock pop era of the 70’s & 80’s to now.

We have played numerous venues on the coast including Woodport, Coast hotel & Avoca beach hotel to name a few. We are proud to say that we are reliable, consistent and professional and have helped out many times with fill in gigs when others fail to deliver. Breakout band members are also in other professional outfits inlcuding Jellyfish, Spitfire, Let there be bon, Roadrunners blues band, Gravytrain and have previously been in Supernova & Crunchtime…. and have all been gigging for over 20 years.