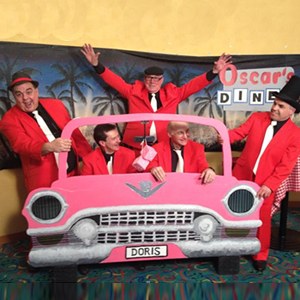 About The Rockin Eddie Band

The Rocking Eddie Band has been doing the Sydney circuit for nearly 5 years. Formed in late 2010, The Rockin‘ Eddie Band, or T.R.E.B aim is to accommodate all forms of 40s, 50s, and 60s classic dance steps. The style of music performed by T.R.E.B varies to say the least – from swing, rockabilly, country and jazz, T.R.E.B plays it all.

The band is made up of 5 of the best musically education musicians and has had members being part of some the best bands Australia has produced including bands as Blue Berry Jade, The Bellhops, The Atlantics, The The bar Studs, The Wiz Cats and many more. The band has a great following in a range of areas including Sydney, Newcastle and further and has a great reputation for playing to the dance floor and not to a playlist to set the mood.