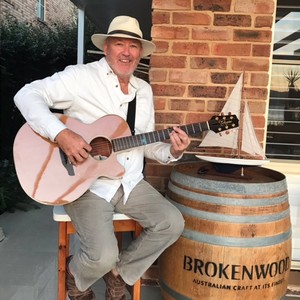 Guitarist/Singer Robert Hickey has covered the full spectrum of music genres throughout his five decade career. After headlining pub and club rock bands in Sydney during the 70’s and working on cruise ships, Rob moved to the Central Coast during the 80’s, performing in bands and as a solo act in pubs, clubs and restaurants for many years. During the 90’s and into the 2000’s Rob trained in
classical singing, winning the Central Coast Aria Competition and took to the stage, appearing in many lead roles for the Gosford Musical Society, Opera Hunter and other groups. After retiring from a long career as a high school teacher, he is back working professionally with a huge repertoire of songs from an eclectic mix of genres and styles.
Rob tailors his performances to suit the venue and clientele. From covers of classic 60’s and 70’s soft rock songs to rock ‘n’ roll, blues, reggae and jazz. His influences include The Eagles, America, James Taylor, Santana, The Beatles, Chuck Berry and Aussie Rock icons. Whether it’s a laid-back, sunny afternoon in a pub beer garden, a dance night in a club auditorium, or providing background music in a restaurant, private party or wedding, Rob has the music to fill any need on any occasion.
Rob uses a Bose PA for maximum clarity and presence. Backing tracks are also utilised to provide a fuller sound for dancing and bigger venues.