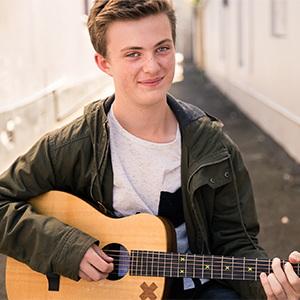 Riley Lovell is a singer songwriter based on the Central Coast, busking for the past two years playing a mix of cover and original songs. Riley has had gigs a Shelly’s Cafe Saratoga, Munchas Cafe at Shelly Beach, local markets and Mingara’s Relay for Life. Riley has also performed in a number of musical’s with Gosford Musical Society and the National Theatre Company in Newcastle. In 2015, Riley won the Shine Talent Competition and got the opportunity to record songs at The Grove Studios in Somersby with influence from Coast Academy of Music. In 2016 Riley had the opportunity to perform at Fairplay Entertainment’s Emerging Artists event and has since been working hard on improving his music and skills.

Say Something by A Great Big World

Hand on your heart By Jose Gonzalez

Fire and Rain By James Taylor

Mess is Mine By Vance Joy

Bittersweet Symphony By The Verve

Lonely Boy By The Black Keys

Talk is Cheap By Chet Faker

Good Riddance (Time of your life) by Green Day

How would you feel By Ed Sheeran

The scientist By Coldplay