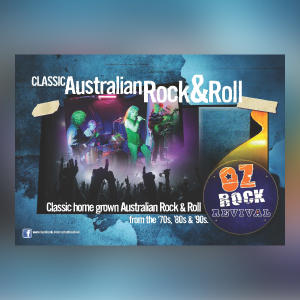 The 1970s, ‘80s and ‘90s were eras where Australian Music stood proud and unique against the rest of the
world and still continues to do so.  The Goanna Band, Mondo Rock, Sherbet, INXS, Richard Clapton, Skyhooks, and the Black Sorrows, just to name a few, produced music you couldn’t find anywhere else in the world, and still can’t to this very day.

Oz Rock Revival came together from a similar Oz Rock style band called OzRock Unlimited formed in December 2012 and was suddenly disbanded early in February, 2014. So not to let the fans of the band down, four of the original five members got back together with a new guitarist and with the new name to continue this truly rich legacy of great Australian Classic Rock, to revive it and breathe new life into the music.

So Oz Rock Revival was born, and is a blend of professional musicians with a passion for Australia and
performing its music, who are dedicated to maintaining the standards of performance that made these songs
great. Tight, well rehearsed material with all the backing harmonies you heard in the originals and a passion for live performance that provides a showcase that carves its own place in the Australian Music Scene.
This show is not to be missed, so whatever your scene, clubs, pubs, corporate or private events and functions,

Oz Rock Revival will resonate with the best of Australian Music, played at its best.