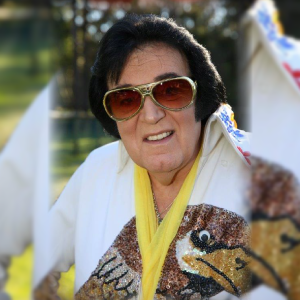 About Norm Bakker – A Solid Rock Salute To Elvis Presley

Even though Norm Bakker has been singing for a number of years prior, this was one big challenge but nevertheless a dream come true to be able to perform a tribute to his idol the king of rock ‘n’ roll “Elvis Presley”.

Even from its debut Norm slotted into the part of Elvis with ease and this was due to the fact that norm’s personality caters only for the best effort and nothing less, of course there are many impersonators, and norm insists that his show either as a full production or as a solo guest appearance is more a tribute to Elvis and not an imitation, and was determined to do an interpretation that Elvis fans would enjoy.

Make no mistake, Norm has the finesse and expertise to entertain any audience whether they are ardent fans, but most are convinced after his performance.

The show has taken norm to many places overseas, and has performed in all major clubs, nightclubs, interstate and international hotel chains and numerous appearances on tv in addition, radio programs. Norm’s success in these ventures is evidenced by his constant return engagements.

You might ask, “what makes a solid rock salute to Elvis so magic?” Well……it’s because Norm doesn’t try to be Elvis; his warm generous personality and sincerity to his audience makes this show stand out from others, and as norm says:

“There is only one Elvis, and in our lifetime there will be no other like him”.

Elvis Presley’s biggest fan, Norm adorned in fabulous costumes of splendor bringing the king of rock ‘n’ roll back to life performing his ultimate tribute “a solid rock salute to Elvis” and singing all his biggest hits.

That’s Alright Mama
Burning Love
Love Me
Rock A Hula
Follow That Dream
Little Less Conversation
I Believe
You’ll Never Walk Alone
It’s Now Or Never
Rubberneckin’
Little Egypt
Wear My Ring
If I Can Dream
It’s Over
Heartbreak Medley
Johnny B. Goode Viva Las Vegas
Welcome To My World
Kentucky Rain
Walk A Mile In My Shoes
Wonder Of You
Fool Such As I
Kissin’ Cousins
Love Me Tender
Jailhouse Rock
In The Ghetto
Wooden Heart
Don’t Cry Daddy
Suspicious Minds
I Can’t Stop Lovin’ You
American Trilogy
I Can’t Help Falling In Love With You