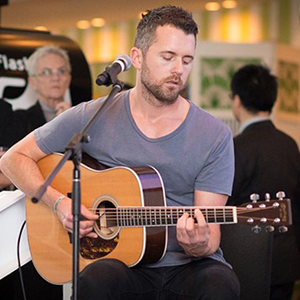 Mark, born and raised in Gisborne on the east coast of the Nth Island of New Zealand.
He began playing gigs in bars at the age of 16 years old around this small coastal city. Live music would eventually take him all around the north island until the age of 22, playing in various solo, duo and 2-5 piece line-ups.
His style was infused with elements of reggae, rock and rootsy pop, which were popular at the time in NZ.
After moving north and playing gigs in the local circuit of the university city of Hamilton, he was approached to play on Rangali Island in the Maldives. He played 3 stints over an 18 month period at the Hilton resort, performing for Sir Paul McCartney at their NYE Celebration. After that he moved to London to further explore his craft. Hilton Park Lane (Windows Bar and the Bistro) being one of his regular gigs! He ended up in Sydney Australia…playing as resident musician at “Table for 20”, from it’s beginning in 2006 to its closure in Dec 2014. Since he has been a regular fixture at “The Manly Wharf Hotel” and “Remy & Co Pasta Bar” to name a few.

He has recently just returned from another contract in the Maldives performing at the prestigious “One & Only Reethi Rah, where he got a once and a lifetime opportunity to perform a few numbers with Robin Thicke. His style is very adaptive and he is known for taking songs old and new, and making them his own. The sound is somewhere between the funky acoustic stylings of Ed Sheeran and Jack Johnson but goes everywhere around and in between, all the while staying true to Ferris’s own unique style. The loop pedal has become a big part of his live performances, enabling him to suit many different audiences, venues and events from laid back and beachy acoustic sets to upbeat dancy numbers.

THE WEEKEND –
STARBOY
I FEEL IT COMING