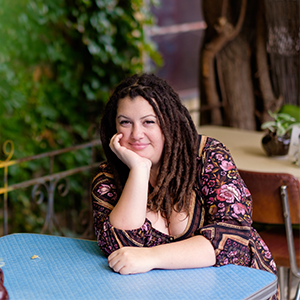 Roots warrior Kelly Brouhaha is all about the “Feelgood” side of life. An award winning songwriter and multi-instrumentalist with achingly soulful vocals, her uplifting music is more than a simple band-aid to the blues.

Once upon a time this traveller had a full-time job, a marriage and a mortgage that was sucking the life out of her to the point that she’d randomly pass out. Miserable, anxious and stressed out – she chose a different path, bought a van and created a life doing what she loves. Remaining 100% independent her singles to date have achieved radio success with Audrey’s Song added to rotation on ABC radio, As Long As There’s A Smile reaching #2 on the AMRAP charts and every single to date featured on Triple J Roots and All.
Since 2009 Kel has travelled Australia’s East Coast extensively playing roughly 200 shows per year. With a string of supports including Clare Bowditch, Mia Dyson, Liz Stringer, Sarah Mcleod, Jen Cloher and Wes Carr – Kel spreads an infectious positivity with her comedic stage show and her soul inspired roots tunes.

“From laid back soulful start to  uplifiting party finish Kelly’s beautiful voice and bubbly personality helped take our event to the next level. She’s a joy, we can’t wait to work with her again!” – INTERWEAVE GROUP

Some of Kelly’s career highlights have included;

I Will Wait – Mumford and Sons

In The Summertime – Thirsty Merc

Pumped Up Kicks – Foster The People

Beneath Your Beautiful – Labrinth and Emelie Sande

Next To Me – Emelie Sande

Dear Mr President, Don’t Let Me Get Me – Pink

Flashlight, Who You Are – Jessie J

Send My Love To Your New Lover, Rolling In The Deep – Adele

Get The Party Started, So What, Trouble – Pink