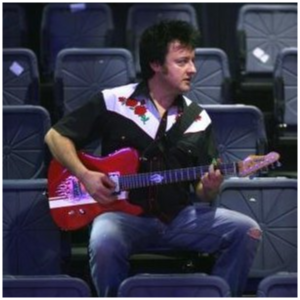 JONNY GARDiNER is the Singer / Guitarist / Frontman for Sydneys No 1 Corporate & Party band “The Nevilles” and has been since 2003. In that time JONNY has appeared on Channels 9s “The Footy Show” in the house band and has performed many “uber” gigs including a show in front of 50,000 at Suncorp Stadium before the footy finals in 2008, Hong Kong Stadium for the Bledisloe Cup in 2010 and numerous corporate function in venues as far afield as Hawaii, Fiji & Malaysia.

Jonny is often the go to guy when it comes to booking big nights like Grand Finals, New Year’s Eve, Long weekends etc. . With a vast selection of well know tunes and a natural flare for involving audience participation, Jonny Gardiner is a favourite for Corporate Events, Parties & Pub Gigs. Drawing on classic songs by Elvis Presley & the Beatles right up to modern hits by bands like The Killers and the Foo Fighters, his mix of material caters to all audiences.

As a solo cover performer Jonny is able to keep the house rocking with recorded backing tracks but prefers to keep it real playing acoustic guitar and using a stomp box to keep a beat. Jonny has recently augmented his show with looping which adds an interesting visual element whilst also providing accompaniment that gets the crowd dancing without sounding like a karaoke singer.