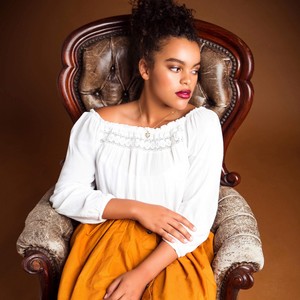 Bianca Mutukura is a young singer-songwriter with a vibrant quirky pop / indie rock influence to her music. Bianca has a unique style with her key musical inspirations including The Beatles, Queen, Harry Styles, Florence Welch, Fleetwood Mac, Billie Eilish, Angus and Julia Stone.
Bianca shows a maturity in both her vocal and songwriting abilities that extend beyond her years and as such has performed in 2017 and 2018 YIPA which resulted in a vocal scholarship to attend the Central Coast Music Academy. She has also performed at many other events and venues over the past 18 months including the Central Coast Schools Showcase, ‘She The Change’ Annual Rally 2018, The Record Crate in Glebe, 5 Lands Walk 2018, 2017 Kids Day Out and The Pocket Bar Sunday Sessions to name a few.
When Bianca is not at school finessing her craft performing or collaborating with her fellow students, you will find her busking at local markets including regular stints at Shelly Beach, Terrigal and Umina Beach markets. She is also a regular lunch time performer at The Waterfall Cafe at Mt Penang.
Having experienced a massive year not only in the performance space she has also spent much of her time collaborating with some of Australia’s promising young producers and topliners. Bianca is always on the lookout to share and perform.