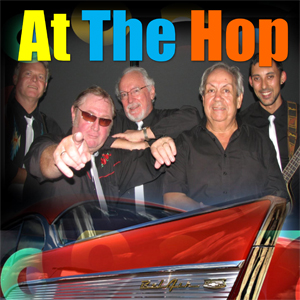 About At The Hop

AT THE HOP was formed in 2003 and has since notched up well over 1,000 performances and are in constant demand in the club circuit. They have appeared all over NSW performing at festivals and have made guest appearances in Queensland, ACT and Victoria.

Over the years AT THE HOP has evolved, constantly improving it’s line-up and stage show, to ensure that the show they perform is what the audience wants.

A typical AT THE HOP show is a charismic, energetic performance recreating the excitement of the Rock`n`Roll era together with audience interaction and irresistible humour that is guaranteed to get any party going.

With guitars, keyboards, bass, drums and lots of vocals, AT THE HOP are the perfect tribute to any 50s/60s Rock`n`Roll dance party. AT THE HOP covers a range rock`n`roll, rockabilly, swing and doo-wop and are a great example of the 50s/60s music scene. If you want to jive, bop, stroll or smooch, this is the band for your event.

From the opening lines of their first song, to their farewell song of the evening, the dance-floor will be full of party goers having the time of their lives enjoying Rock`n`Roll as it should be performed.

Whether it be a dance night, a Rock`n`Roll party or just a nostagic walk down memory lane, you can’t go past AT THE HOP