A Salute To The Boys From Oz – John Farnham, Peter Allen, The Bee Gee’s & More 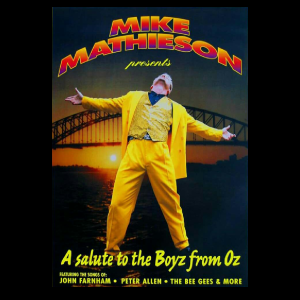 About A Salute To The Boys From Oz – John Farnham, Peter Allen, The Bee Gee’s & More

With his dedication to musical excellence MIKE MATHIESON has established himself as one of Australia and New Zealand’s most respected, professional and sought-after entertainers in the Australian and international entertainment industry. Sporting a vocal range that spans almost 3 octaves Mike has the uncanny ability to move from a soft emotional ballad then effortlessly into Jazz and classic standards to full on rock with equal ease. There are few in the entertainment industry today that have the vocal ability and versatility to take so many styles of music and yet make them their own as Mike Mathieson can.  Mike’s career has been one of great highs and successes and continues to expand and grow daily.

He has toured nationally and internationally with a variety of artists from acclaimed English comic genius DICK EMERY and JOHN INMAN from “ARE YOU BEING SERVED” fame to international recording artists LAURA BRANNIGAN and BARRY MANILOW.

A SALUTE TO THE BOYZ FROM OZ”

Combining great musicians, stunning costuming and Mike Mathieson’s incomparable vocal styling and exciting stage presence this show is a knockout in every sense of the word.

“ROCKIN ACROSS THE TASMAN”

Relive the soundtrack of our lives and realize the true connection musically that these two great countries have shared.

Put on your boogie shoes, drag out the flares and get down on the dance floor as Mike Mathieson and his band turn up the heat with this high energy party and dance show featuring songs from the disco and dance era of the 70’s 80’s and 90’s.

Including songs from the queen of disco Donna Summer, KC and The Sunshine Band, The Jackson 5, The Tramps, The Bee Gee’s, Gloria Gaynor, ABBA, Blonde, Thelma Houston and many more.

Dance the blues away with this great Mike Mathieson show.