Sam & Andy are a fresh, young powerhouse couple bursting with personality and spark. Consistently delivering mesmerising, unforgettable performances, they will charm you, entertain you, captive you, inspire you, and simply make you fall in love with them.

Sydney born and raised, Sam Hetherington & Andy Walton grew up just a short car ride from each other but didn’t meet until years later when studying at the Australian Institute of Music. Both were brought up in families where music was a staple, and each flourished as they were taken under the wing of some of the best music educators in the country.

Both appreciated music that was good – no matter what genre. The kindred way they each committed to a musical performance with honesty and passion was synonymous. The way they sang together was truly captivating. And then, after asking her (with a wink and a smile) to “join his band,” the way Andy made Sam laugh ended up leading to something much more than just a musical understanding.

Little Talks – Of Monsters And Men

Back To Black – Amy Winehouse

You’ve Got A Friend – Carole King

To Her Door – Paul Kelly

How Come You Don’t Call Me – Alicia Keys

Waiting On The World To Change – John Mayer

You Got The Love – Florence & The Machine 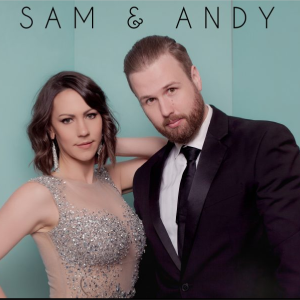