Dean Weston is an experienced solo musician based in Port Macquarie, Australia. Main genres are originals, rock & country music. Dean’s solo show has a mixture of covers from
the 50’s to the 80’s combined with some of his original work and a few modern hits.

This always goes well with the patrons who enjoy remembering old favorites from years gone by. Dean is a singer/songwriter of rock, pop and country music, has also worked as a producer, and has been involved in various bands and projects for over 15 years playing venues in Sydney, Newcastle, Central Coast, Brisbane and Regional NSW. Dean also had a recording career as part of a duo in the UK in the early 2000s and has also won awards for songwriting from the ABC in Australia.

Over the past few years Dean has focused on his solo projects. Following a move to the Mid-North Coast, NSW Dean plays regularly at venues along the coast including North Haven Bowling & Recreation Club, Macksville Ex-Services Club, The Westport Club, Port Macquarie, Sporties Tuncurry and Nambucca Heads RSL. Dean is also a regular entertainer aboard Moonshadow Cruises Nelson Bay. The sound of Dean’s original music ranges from traditional country styles to modern styles influenced by exciting rock sounds. Dean uses a simple and straightforward style to tell his stories with some musical departures from what might be expected. Dean Weston is available to play his show in Central Coast, Newcastle/Hunter and Port Stephens, Mid North Coast regions for clubs, pubs, private or corporate functions, weddings and festivals. 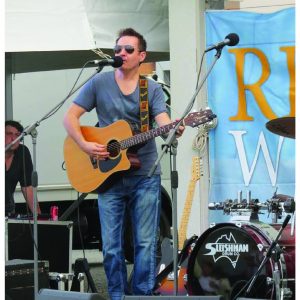